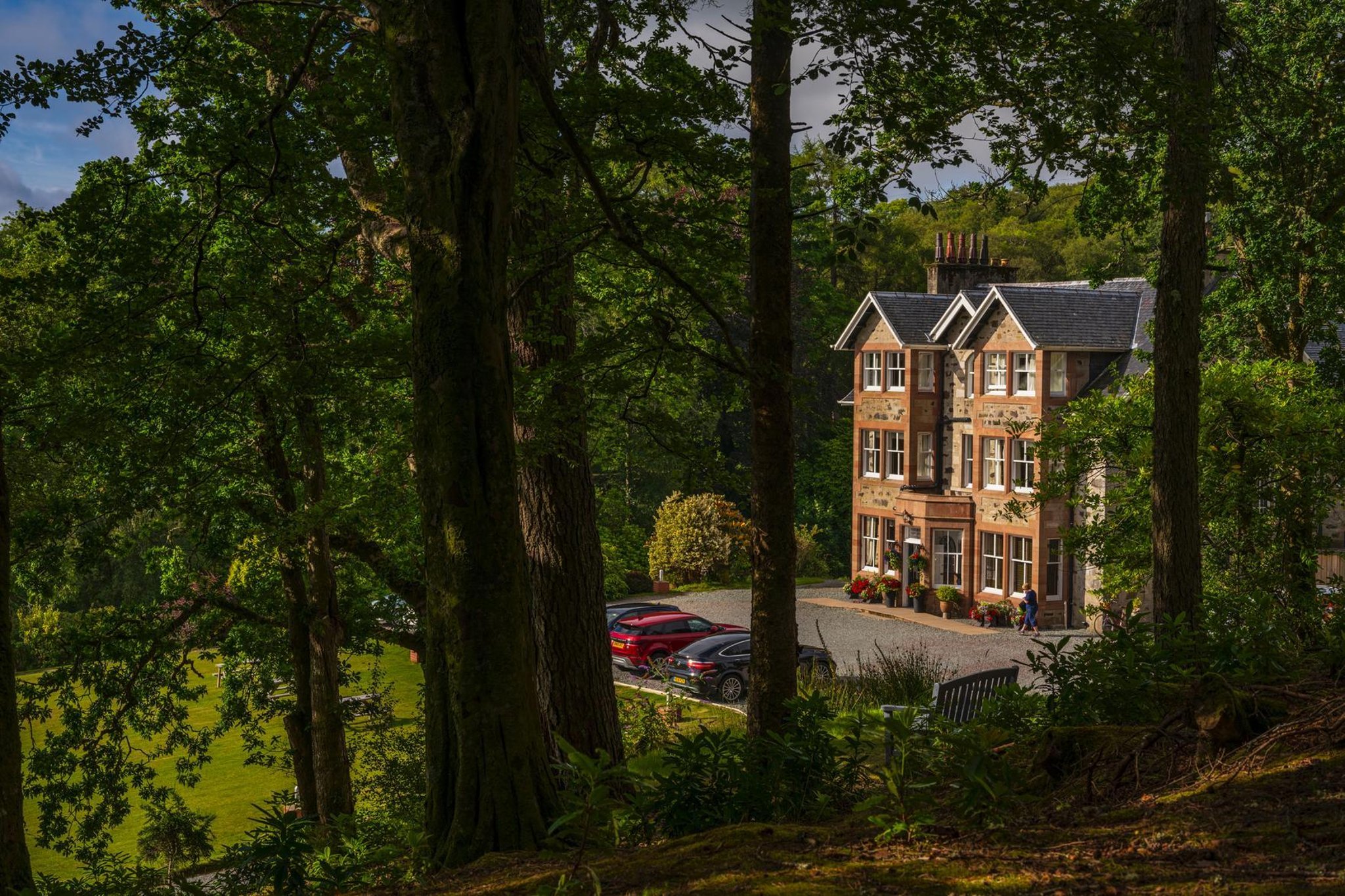 The Isle of Skye must be the envy of tourist boards around the globe, not least in the UK.

Because it quickly becomes apparent, when traversing the Highlands on route and the Inner Hebrides in particular, that nearly every vantage point offers an awe-inspiring mountainous view.

What’s amazing is that this otherworldly terrain is so relatively close to home in Yorkshire – surely a boon for Scotland’s travel business at what’s still a precarious point in the industry’s recovery after you-know-what.

The woodland in the grounds of the Duisdale House Hotel.

Having stayed in Livingston the night before our trip, my father and I set off to Skye via the A82, a scenic route which afforded us the opportunity to take in the beautiful Loch Lomond – the largest lake by surface area in Great Britain at more than 22 miles – the majesty of Glencoe and, from afar, the mighty Ben Nevis itself in Fort William before we even made it to the Skye Bridge.

Our accommodation was the stately former Scottish Hotel of the Year, the Duisdale House Hotel, which was created as a hunting lodge in 1860 and is now one of three venues forming the Sonas Hotel Collection, the one situated at Isleornsay (across the water from the island of Ornsay) on the Sleat Peninsula on the south-east of Skye.

The crackle of open fire and soft piano music greeted us in the hotel after our long journey and the staff – whose efforts during our two-night stay cannot be applauded enough – welcomed us wholeheartedly.

Food and beverage supervisor, Robert, was quickly on hand to offer a drink in the hotel’s relaxing lounge, while his colleague Suzy (an Edinburgh native who has settled in Skye to explore its natural wonders) happily recommended the best spots for hiking and observing wildlife – including a boat ride from the town of Portree for a chance to see a White Tailed Sea Eagle, and the Cuillin mountains for Golden Eagles, if you’re in luck.

A Duisdale House Hotel room overlooking the Sound of Sleat.

Speaking of luck, our stay from March 21 to 23 coincided with Scotland enjoying some of the warmest weather conditions in Europe that week, reaching well above 20C. We didn’t expect sun cream to be a factor in our hiking prep that early into spring, but no complaints.

The views from the hotel and its 35 acres of gardens are excellent, and the window in our room on the first floor allowed us to look out over the Sound of Sleat’s waters, towards the mainland’s mountains – a scene that was also quite something the morning after while sitting outside the front of the Duisdale during sunrise, as the woodpeckers went to work.

With only two days to explore Skye – while it is not overwhelming in size, I would recommend staying longer to experience it comprehensively – we concentrated our efforts on exploring the island’s southerly tip by embarking the Point of Sleat walk and a couple of the island’s nature-based tourist attractions elsewhere: the aforementioned boat ride and a stop at the famous Fairy Pools.

Although we didn’t have time to properly visit the Old Man of Storr – a large and distinctive pinnacle of rock which is among the island’s busiest tourist spots – it looked incredible at a distance while we were on the road.

If our walking boots saw plenty of action in the day, we embraced the hotel’s sparkling hospitality in the evenings. Food and drink clearly means a lot to this establishment, which has two AA Rosettes, and as a result the cuisine is impressive – thanks to the dedication of head chef Jason and his talented team of George, Graham, Io and Aaron.

Each meal began with a trio of intriguing canapés in the lounge – certainly my first ever goats’ cheese macaron, for example, though I pray not the last – and the chefs kindly complemented their great fare with an amuse-bouche during our evening meals.

Dishes on the menu during our stay included starters of salmon roulade, roasted pigeon with black pudding, bacon and jam, and scallops with confit chicken wings; examples of mains included loin of venison, fillet of beef, and butternut risotto.

If I can offer one piece of advice, though, it is to order the banana parfait with chocolate cremeux and toffee sauce, should it be on the menu. I chose it for dessert on the second night and wished I’d had a time machine to go back to the first.

A chef gets to work at the Duisdale’s restaurant, which has two AA Rossettes.

The hotel offers local and national tipples, too, with Skye’s own Torabhaig single malt Scotch whisky among the many on offer, alongside the Misty Isle Gin (both meeting the approval of the old man, who was the designated taste tester).

On our first full day, after a superb hearty breakfast (staff members such as Silke continuing to offer brilliant service around the clock), we followed the one-track road to the Aird of Sleat, from which we walked to the Point of Sleat.

This magnificent route takes hikers to the southernmost point of Skye on an undulating trail, which in the unseasonably warm temperatures was hard work for these two semi-experienced hikers, though the more capable among us would take it in their stride.

Views of the sea and ice-capped mountains are abundant during the roughly five-mile ramble (it always feels more on the hills, and so it was with this walk), but the real reward is Camas Daraich – a stunning white sand beach within a cove, offering a peaceful and, if fortune favours, private view of the surrounding high rocks and crystal clear waters.

If the Impressionists had witnessed the sun upon these waves, the French Riviera may have lost a few famous patrons. For the rest of us, it’s the ideal picnic spot or rest point before continuing to the modern lighthouse at the Point of Sleat itself, affording incredible views across the Cuillin Sound to the island of Rùm.

Sunrise over the Old Man of Storr on the Isle of Skye in Scotland. Photo: Tom White/PA Wire.

Enthusiastic about the prospect of more exclusive wildlife, though, after checking out the Duisdale the morning after, we travelled to Portree for a two-hour sail around the Sound of Raasay – from where you can see the Isle of Raasay’s volcanic summit Dùn Caan – organised by Stardust Boat Trips.

As ever with wildlife, catching sight of something memorable is so often luck of the draw. A man departing the trip before ours shrugged as he reported that the eagles couldn’t be tempted down from their nests.

By contrast Warren, the skipper, also said that on the day before our sailing, an orca had been seen further up the Sound.

With the sun beating down, though, even without spotting something special, this (dog-friendly) boat ride is another great way to see Skye’s diverse terrain without exerting yourself, especially for those who can’t do the longer walks.

We stopped at various points to scan for wildlife and eventually pulled up near a colony of common harbour seals lounging on the rocks.

It’s while enjoying these that Warren points to the sky and, with experienced understatement, says: “There you go – a couple of sea eagles.”

Perhaps less famous than the Golden Eagle, the White Tailed Sea Eagle is actually the largest UK bird of prey, boasting a wingspan of 200-240cm according to the RSPB.

Seeing these fierce-looking creatures up close – mere metres away – is a sight to behold for bird lovers or anyone wishing to experience something really quite rare.

Arguably, it is miraculous – they went extinct in the UK during the early 20th century because of illegal killing, but are back after a successful reintroduction programme which brought them over from Norway in the 1970s.

Today, they have come to snaffle the fish launched aboard by Warren.

The female eagle gracing us was one of the last to come over from Scandinavia, he explains, which is why she copes with human contact. Indeed, she seems perfectly comfortable putting on a thrilling display for us.

Our time on Skye is almost up, but we decided to make a dash to the Fairy Pools, where three walks of varying length and difficulty can be recommended. Since we’re short of time we do only the shortest (around three miles).

The attraction comprises a series of waterfalls and clear blue pools on the River Brittle in which visitors can bathe and take in the foothills of the awesome – in the word’s true sense – Black Cuillin mountains.

If the Impressionists missed a trick at the Point of Sleat, the Romantics before them would have been in raptures over these immense Alpinesque forces of nature, and again it is striking how near to home such grandeur can be found.

It’s a good job too – the Golden Eagles didn’t come out to play, so we’ll need to go back.

The Merit & Citation Awards Ceremony was held this morning at the Maine Criminal Justice Academy in Vassalboro. The ceremony

In a joint major investigation between 60 MINUTES, The Sydney Morning Herald and The Age, award-winning reporter Adele Ferguson reveals...

There have been hundreds of comments in the past week about Hawaii vacation costs, and suggesting that Hawaii is ripping...

Hundreds of years ago civilization fell. What used to be the stunning empire of Symbaroum fell to ruin, and was...

If you don’t yet have a place to stay during World Athletics Championships Oregon22 July 15-24 in Eugene, don’t give...